Signs series: Plaques of artists who lived in Tel Aviv

The project was first started in 2000 and is similar to projects in other major cities around the world, such as the "Blue Memorial Plaques" in London and the like. The project places a memorial plaque on the homes of writers, painters, sculptors, actors, composers and artists from other fields who lived or worked in the city of Tel Aviv.

Streets full of artists
As can be seen on the map, there are streets where there was a concentration of artists: the streets of Frug and Dov-Hoz (parallel to Dizengoff Street) in which lived, among others Aharon Meskin and Raphael Klatchkin

Those who are not artists
In some cases, personalities have been commemorated who have contributed greatly to the character of the city of Tel Aviv, even though they are not artists, such as: Moshe Feldenkrais

The signs are usually in a uniform format: the emblem of the city of Tel Aviv-Yafo, the line: in this house lived, the field of art (painter, sculptor, poet, etc.), the artist’s name, year of birth and year of death, And identical text in English.

There is also Yiddish
There is at least one case where under a text in Hebrew and English, a text in another language is also added, this is a sign located on Tashah St 11 in the place of residence of the Yiddish poet Abraham Sutzkever

Shape and Location
All signs are made of stone and most of them are rectangular in shape. There are cases where the sign was placed on a pillar in the sidewalk (see "Refusal of the tenants" above), in which case the signs are usually bulky (form of prism) as in the case of Alexander Penn

As mentioned, the signs are usually on the front of the house in question (Jacob Fichman

), sometimes on an inner wall or even inside the stairwell (Arik Lavie

), and sometimes on a pillar in the garden or Courtyard (Arik Einstein

The treatment of houses where more than one artist lived was done in two ways: the artists shared the same sign, for example Aharon Meskin and Raphael Klatchkin

(It is probable that they both died before the sign was placed), or that they were commemorated on separate signs, for example in the house at 21 Khisin Street - Aaron Avni

Missing signs
Most of the signs are on site. Some of the signs were removed (probably temporarily), due to the "evacuation-construction" momentum in the city of Tel Aviv, and we hope that when the building is completed, the sign will return to its place.
One of the signs in the series: 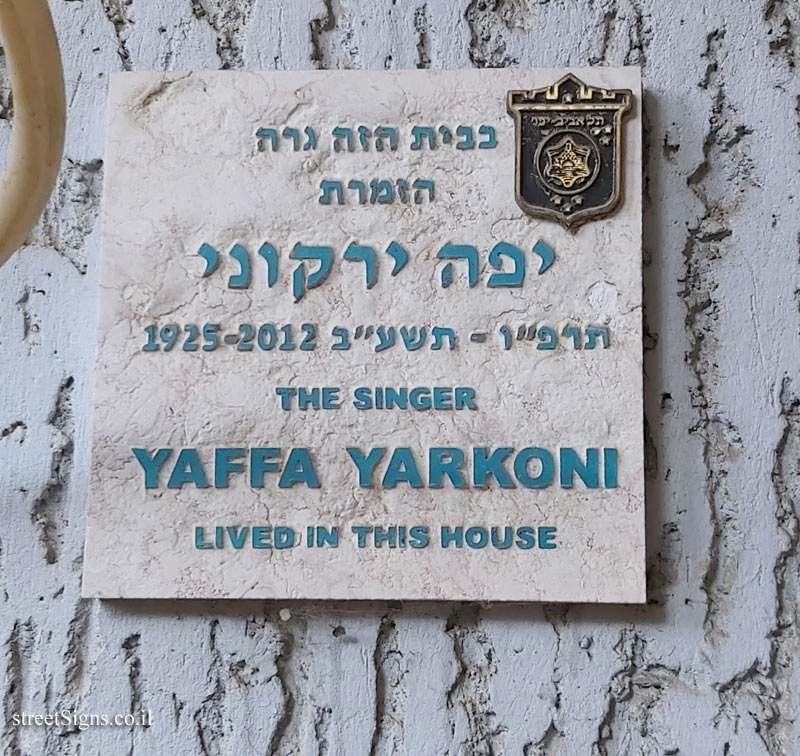