Blue plaque is the name given to signs displayed on the walls of houses inhabited by famous people in the United Kingdom (and elsewhere). The name derives from the classical form in which the first signs were created

, but as you can see on the website, some of the signs are not blue at all

.
The first sign in this series was placed in London in 1866 when the Royal Society of Arts was initially responsible for the signs

, after which it dealt with the Greater London Council and now the English Heritage Trust.

As mentioned, many of the signs are an "English Heritage" initiative

, but other bodies have added signs on their initiative: London County Council

, City of Westminster (in these cases in collaboration with other bodies related to the sign, such as The Royal Philharmonic Association)

As mentioned, the purpose of the signs is to indicate the place where celebrities lived (such as the house of Charles Dickens

), but over time, signs were added to indicate where certain events took place (the place where the composer Frederic Chopin went to perform his last concert

), places where celebrities stayed when they were in the UK (albeit for a short time, such as where Simon Bolivar stayed

), and even plaques For imaginary characters (memorial plaque to Phileas Fogg’s aunt, the protagonist of the story "Around the World in Eighty Days", on the pub wall MR FOGG’S GIN PARLOR

English Heritage
An organization that takes care of the restoration and preservation of sites in the United Kingdom. Prior to the establishment of the organization, at the end of the 19th century the care of historic buildings was in the hands of the British Ministry of Works. Powers for the care of buildings or historic sites were expanded, and the pool of buildings grew to about 300 sites in 1970. In 1983 under Margaret Thatcher’s care of buildings passed to a body set up specifically for this purpose: the Historic Buildings and Monuments Commission. This body merged with another body (the Royal Commission), until in 2015 the body was split into two, one with legislative powers, and the other English Heritage - a charity that is responsible for the historic sites themselves. Famous sites under the responsibility of the organization are: Stonehenge, Dover Castle and of course the blue round plaques in this series.

As mentioned, the signs are round, some of them are blue and are on the walls of the houses.
Despite the above, there are also signs that are elliptical in shape 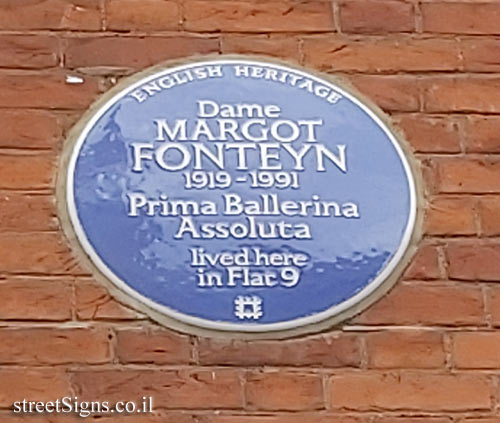 Click for all signs belonging to England Blue Plaques