Signs series: The houses of the founders of Tel Aviv

On April 11, 1909, Akiva Aryeh Weiss organized the lottery for the division of the territories north of Jaffa among the members of the "Ahuzat Bayit" association in which the city "Ahuzat Bayit" will be established which is - Tel Aviv.
Ahuzat Bayit was an association established in 1906 with the aim of establishing a new Hebrew city.
The lottery was also called the "Shell Lottery" because the names of the lots were written on shells, which they pulled out of a box at random.
The raffle took place where the monument to the city’s founders is today - at 19 Rothschild Boulevard

The association had 66 members, these are the families of the founders, with names known as: Tzina and Meir Dizengoff

, Miriam and Menachem Sheinkin and more.

In this series, the founders of the city are commemorated by placing a plaque near their place of residence.

The names of the founders are also commemorated in other places in Tel Aviv: Founders’ Square

where the monument to the founders of the city is located

. On one side of that monument the names of the founders of the city are engraved

The signs are an initiative of the Tel Aviv Municipality and the Tel Aviv Founders’ Families Association - an organization whose goal (according to what is listed in the registrar of associations on the Guidestar website): "To contribute to the promotion and perpetuation of the heritage of the founders of Tel Aviv-Yafo. To commemorate the memory of the founders of Tel Aviv-Yafo by naming streets, gardens, institutions, facilities and various sites in the name of the founders. To assist in the operation, preservation and maintenance of buildings."

The signs on the ground at the foot of the founders’ houses are bronze square plates, divided into 4 equal squares, including:
1. The text: This is where the home of one of the 66 founding families who built Ahuzat Bayit, Tel Aviv, was built
2. First name and last name (in the case of a couple, both names appear)
3. Symbol of the Tel Aviv Founders’ Families Association
4. The emblem of the city of Tel Aviv - Jaffa
One of the signs in the series: 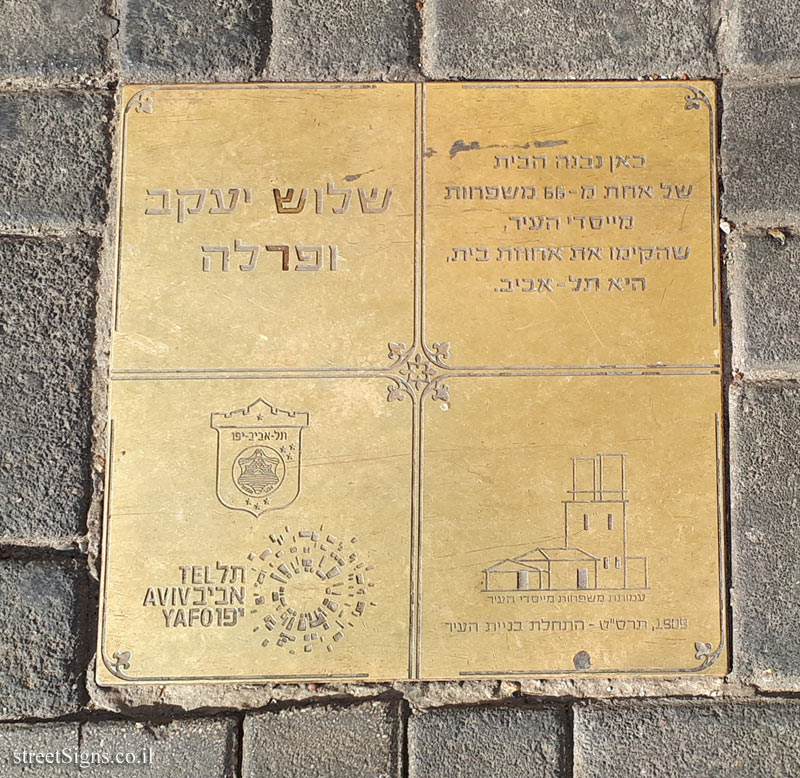