In Tel Aviv, the 3 undergrounds operated: the Haganah, the Etzel and the Lehi.

The largest and most institutional military organization of the three undergrounds. The Haganah was established in 1920 to provide protection against Israeli Arab attacks on the Jewish community. During World War II, the organization collaborated with the British against the danger of the Nazis invading Israel, but at the end of the war, the organization turned its efforts against the British rule in Israel.
The military force of the Haganah - the Palmach - crushing companies - was established in 1931 under the command of Yitzhak Sadeh.
The Haganah also acted extensively in the field of illegal immigration, mainly through the Palyam units (including Operation Boatswain

) and the Hagid’onim (the Haganah’s communication unit)

With the declaration of the State of Israel, the IDF was established mainly on the basis of the Haganah forces.

Among the commanders of the Haganah were: Eliyahu Golomb, Yitzhak Sadeh, Israel Galili, Moshe Sneh and more.

, there were also a field corps operations base in the city

.
Also during the fighting in the British, the Haganah personnel fell in Tel Aviv, and they too are commemorated with signs from the same series:

Etzel (Irgun) - an acronym for the National Military Organization. The Etzel, which advocated more decisive action against the British than the Haganah, was established in Jerusalem in 1931 and consisted mainly of members of the Betar movement and the Revisionist movement led by Ze’ev Jabotinsky.
The Irgun was considered by the British to be a terrorist organization, and pursued its leaders and soldiers. Many of its soldiers were placed in detention camps in Latrun and Eritrea, and some were even hanged.
During World War II, the Irgun’s actions against the British provoked controversy among the Haganah leadership, which collaborated with the British in their war against the Nazis, which led to The "Saison" (hunting season) - the imprisonment and extradition of Irgun activists to the British authorities.
One of the Irgun’s well-known actions that provoked controversy was the explosion of the King David Hotel in Jerusalem, which housed the Mandate headquarters, in which 90 people were killed, including 15 Jews.
Following the declaration of the State of Israel on November 29, in which the UN decided on the partition plan and the end of the British Mandate, there was a rapprochement between the Haganah and the Irgun, despite incidents in various places between the two organizations.
After the declaration, Etzel forces in IDF units were usually integrated into independent units, all of which were composed of their own men. In June 1948, the Irgun brought an arms ship from France (Altalena) on board were also immigrants destined to serve in the Irgun units. Due to a dispute over the distribution of the weapons on the ship (whether most of it will belong to the IDF, or to the Irgun forces that were already in the IDF), and due to fears of a civil war, Ben-Gurion ordered the ship to be shelled and it sank.
The Irgun units within the IDF were scattered among the various units.

The Lehi was considered by the British to be a terrorist organization (the Stern gang), and pursued its leaders and soldiers. Many of its soldiers were placed in detention camps in Latrun and Eritrea, and some were even executed by hanging.

The Lehi’s actions were explosions in British centers of government, but also in civilian places (mainly concentrations of Arab residents), assassinations of British government officials and soldiers, attacks on railways, army camps and more.

With the establishment of the state, Lehi units were integrated into the IDF.

In Tel Aviv, the commander and founder of the Lehi, Avraham Stern, lived, where he was even killed

, was the Lehi headquarters

, the Lehi broadcasting station operated (the voice of the Hebrew underground)

, there were hiding places for weapons

and many operations were taken

The signs, initiated by the Tel Aviv-Yafo Municipality, include two main types:
Old format (similar to the one used to commemorate the underground in other cities) - a rectangular metal panel surrounded by a frame ending in a pillar. On the board are the symbols of the municipality and the immortalized organization

New format: a rectangular metal (sometimes plastic) panel whose head is shaped according to the symbol of the city of Tel Aviv. The signs are on the ground, or on the walls of the houses

In addition, a sign made of stone with a hexagonal shape was found 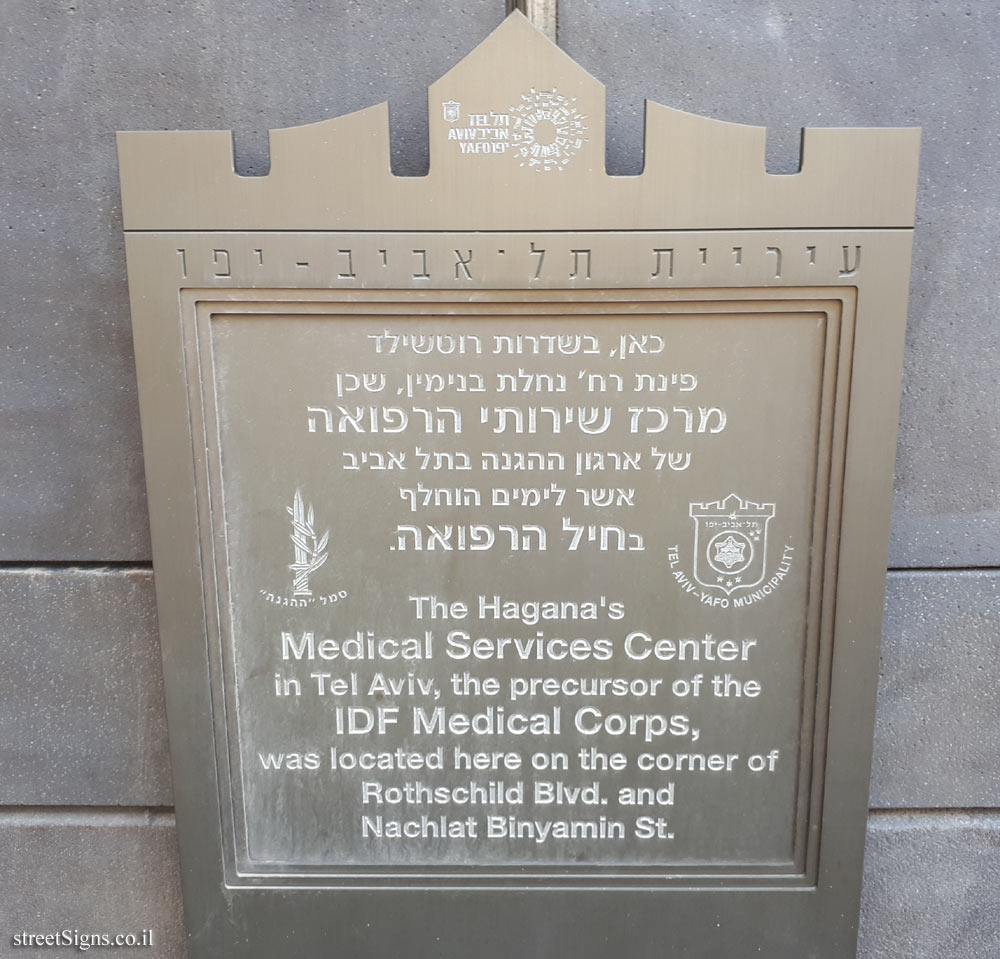 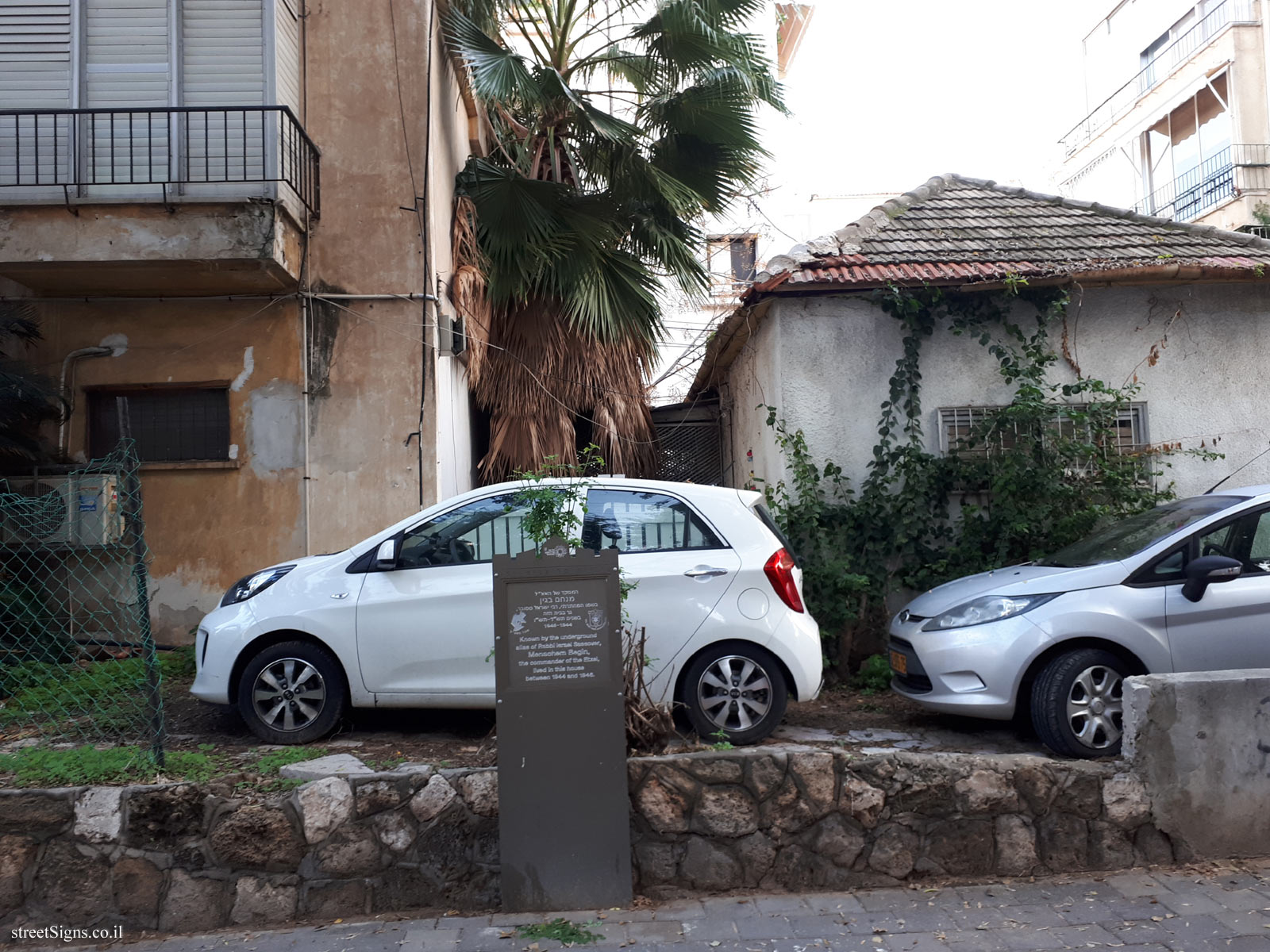