Significant years in the history of Gedera and that of the State of Israel are displayed on this wall.

History of Gedera
Gedera, also known as the "Bilu" colony, was established by Bilu people (Beit Ya’akov Lekhu Venelkha)) who immigrated to Israel in 1882

. About two years after their arrival in Israel, Bilu members purchased land in the place where Gedera is today, and on December 14, 1884, Bilu members Zvi Horowitz and Shlomo Zalman Zuckerman arrived there. They were followed by other Bilu members

.
In the same year the first vineyard was also planted

.
The settlers suffered from a water shortage, and brought water from the nearby village of Katara, until in 1888 the first well was excavated

.
In 1893, a winery was established by Baruch Papirmeister, in which they produced mainly alcoholic beverages: cognac and spirits. The winery owned by "Carmel Mizrahi" was one of the colony’s sources of income

In 1898 the first school was built

In 1904, the Vineyards Association was founded by the winegrowers in Gedera, Rishon Lezion, Rehovot, Petah Tikva and Wadi Hanin, with the aim of processing and marketing the grapes harvested from the vineyards

.
An addition to the colony’s manpower came in 1912 with the aliyah of Jews from the Shar’ab as-Salam district in Yemen

.
During World War I, Gedera was occupied by the British army in its war with the Ottoman army (1917)

.
In 1924, The People’s House was established in Gedera (Mintz House, now Gedera Museum of History and Bilus)

Click for a larger image
In 1929, a hospital for the treatment of lung patients (mainly tuberculosis) was established, established by Dr. Arieh Ben Geffen under the name Bilu

.
Beginning in 1930, immigrants from Germany began to arrive in the colony, most of whom lived in the "German Colony"

.
After the establishment of the State of Israel, in 1949, Gedera was declared a local council

. In Operation "On the wings of eagles" to Raise Yemenite Jews, the immigrants were sent to live in the Gedera transit camp (1950)

.
The last wave of aliyah that reached Gedera (within the time frame that the wall deals with) is "Operation Moshe" to raise the Jews of Ethiopia

About the wall
The wall on which significant years in the history of Gedera are displayed, is in fact a supporting wall built from the need to equalize the height of the ground between two streets (Meller Street and Ben Gurion Boulevard) and thus allow the construction of private homes in the straight area created.
The placement of the signs in which the historical years were entrusted to the architect Shalom Graf, who also designed the southern entrance of Gedera, adjacent to this wall. In various publications the wall appears as: "The Storyteller wall".

The signs are on the supporting wall, they are made of metal and indicate the year of the event and a short explanation line about the event. See the place of the sign on the wall

Click for a larger image
One of the signs in the series: 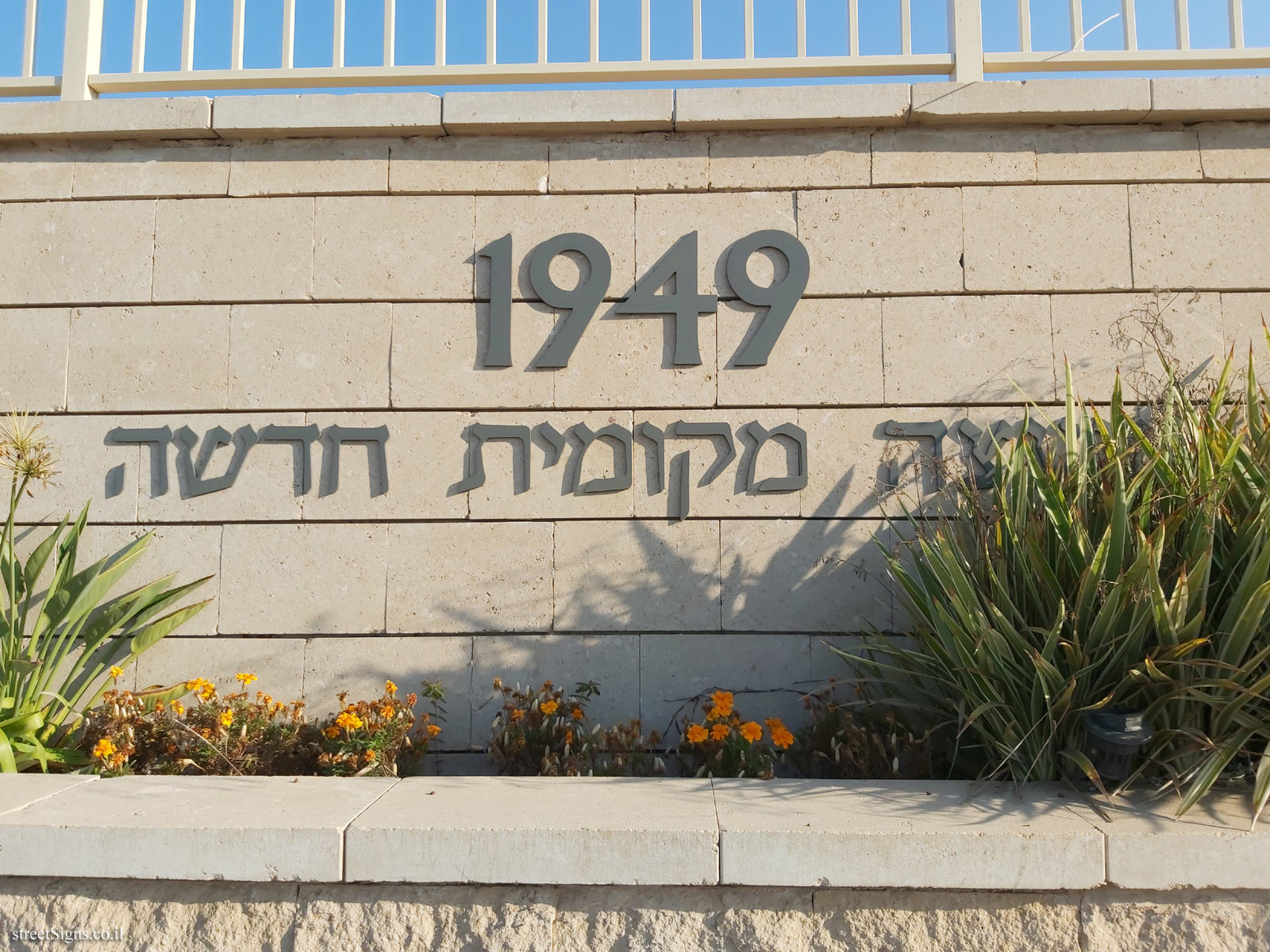 Click for all signs belonging to The historic wall of Gedera